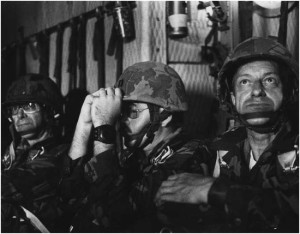 …in the C-130 before the jump. From Left to right is CW3 “Rigger” Roberts, myself (as a Captain), and CW4 John Condich. John, incidently, jumped on D-Day with the 82nd Airborne Division, was captured after 6 days, and spent the balance of WWII in a German POW Camp. 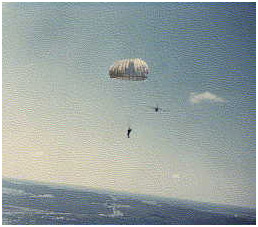 We jumped out as an eight man stick. I was number seven and this man was number eight. Behind him is the C-130 Hercules pulling away. At that time I always jumped with a camera. Shortly after I took this picture, the man in the photo landed on top of my parachute. It seems he, too, was taking pictures. He ran off of my chute before his chute deflated, thus preventing serious injury to both of us. I seldom took pictures after that day. 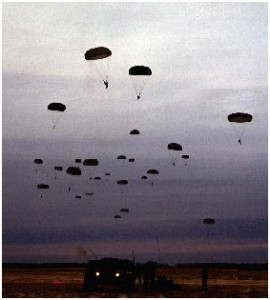 A GREAT WAY TO START EACH MORNING.

This photo is compliments of the U.S. Army Recruiting Command (USAREC) 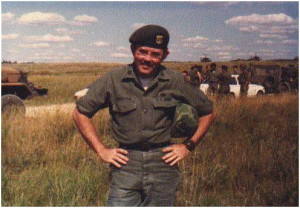 ON THE DROP ZONE WAITING TO BOARD THE UH-1H HELECOPTER.

It is a great day for a jump.

DROP ZONE BELOW ME.

This was taken at Fort McCoy, Wisconsin as I was descending into Badger DZ. Notice the 44 passenger buses on the road at the edge of the drop zone. Apparently the Post was having an Open House that weekend and we became part of the day’s entertainment.

Here is a great Airborne Video. I am not in this video, but I have jumped out of aircraft exactly like this one and into this very same drop zone along with several hundred of my closest friends. As many of you will recognize (unless you jumped with your eyes closed): This is the Sicily Drop Zone at Fort Bragg, NC. The video comes from the US Army Airborne School at Fort Benning, Georgia. This video is for all of my Airborne “brothers” all over the world. Enjoy! 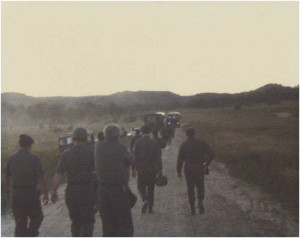 Any jump you can walk away from is a good jump. 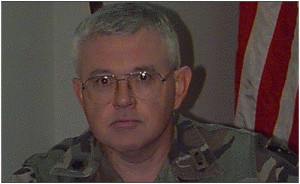 A PICTURE OF ME AS BATTALION COMMANDER. 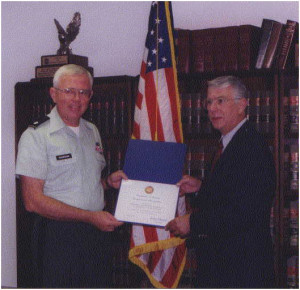 A PICTURE OF ME WITH CONGRESSMAN, DON MANZULLO.

(UPON MY RETIREMENT FROM THE ARMY)

The end of twenty-eight years and thirty days service.

AIRBORNE, ALL THE WAY!